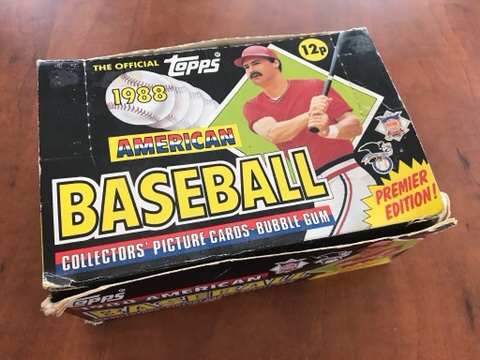 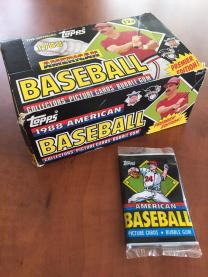 While on a visit to my LCS in the Buffalo area, I came across a wax box that I haven’t seen before. It was smaller in size and had a different shape then other wax boxes of that era. Upon closer look, I found out that it was a box of 1988 Topps American baseball cards, also known as Topps UK minis. I did some quick researching of the product and found out that it was a small set and thought that this would be a fun rip. I bought the box and a few loose packs.

The box of 1988 Topps American Baseball cards had 48

packs. Each pack consisted of 5 cards and a stick of gum. The gum threw me at first because it was white. Apparently, gum that was made overseas didn’t have food coloring added at that time. The cards are smaller in size, 2 1/8″ x 3″. The set consists of 88 cards, including a checklist card. This product was made in Ireland and sold in Great Britain in 1988 and 1989. The cards were printed on white card-stock and feature a nice design. The front has a player photo with a thin red border, surrounded under a thicker white border. The team names are at the top of the card, using each team’s script that is on the 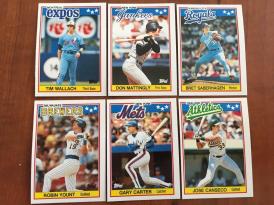 uniforms. The player’s name and position is listed at the bottom. The back of the cards are very unique. The player’s 1987 stats and career stat total are listed and also features a cartoon of the player with a bio stat. Also, there is a baseball with the player’s signature. What makes the card backs unique, Topps included a rule or explanation of a baseball term on each card.

A few weeks ago, I purchased another box of the 1988 Topps American baseball cards or UK Minis. I remembered writing a post and when I went to look for it, found that it was 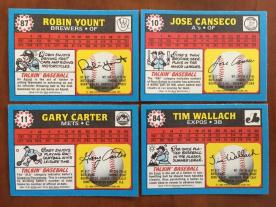 still sitting in the draft folder. Life sometimes gets in the way and I became busy with other things. I started writing this post in June of 2018, but just finished it this week. My interest was peaked again when Matt of the Wax Ecstatic podcast started talking about these card. I highly recommend catching the show released on July 3rd that features this set. Like all of his shows, Matt goes into great detail on the set and a few of the players of cards pulled.

This was an easy set to put together. I opened 40 or so packs from the original box that I purchased and completed the set. The dupes are used for ttm requests or given to friends. This was a fun break and a great look back on a set that came out when I was just getting started in the hobby. This set was only produced for two years and for some reason, the 1989 version is harder to find. I have several packs from the 1988 box that I am keeping sealed in my wax collection. If anyone is working on the set, message me on here or twitter and I can help with some of the dupes that I still have.