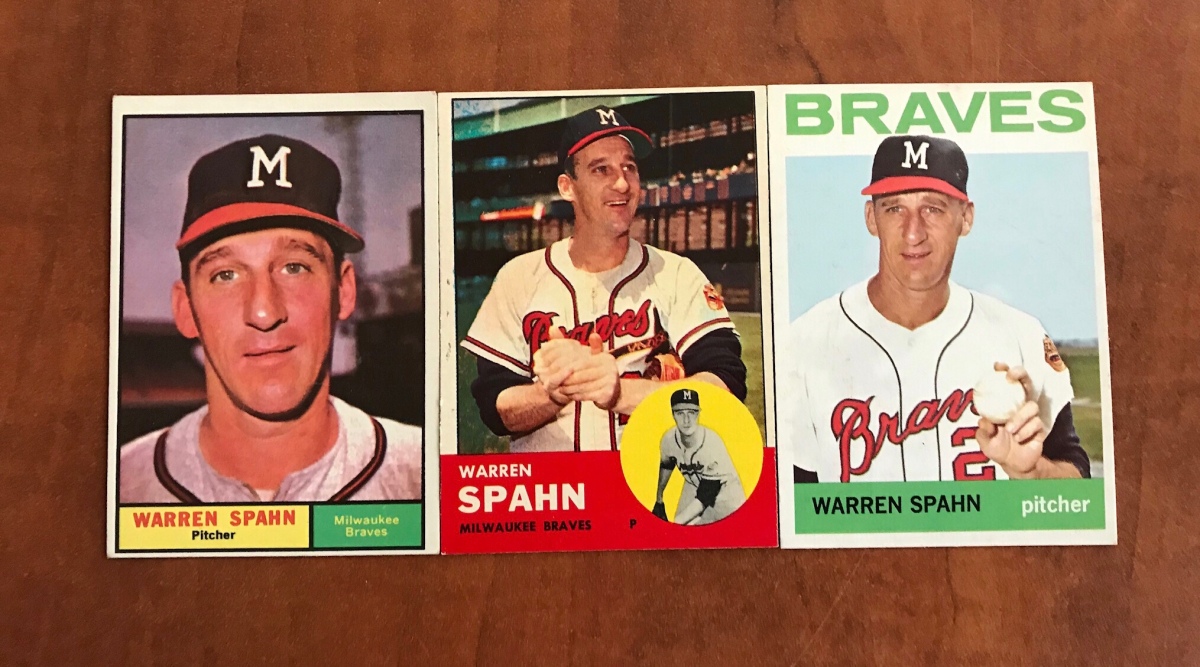 With the sky rocketing prices of current hobby and retail boxes, this is the perfect time to take a closer look at vintage cards. These older cards are full of history. The card designs are iconic and the names are etched in baseball lore. With their careers over, everyone knows who the stars are and which rookies to go after. There’s no need to bet on the futures of unproven prospects.

I’ve been adding a lot of vintage to my collection lately. Currently, I have a few mini collections that I’m working on; graded HOF RCs, a 1960 Topps PSA HOFers set, and a raw HOF collection that I keep in semi rigid holders. I decided to start another. I wanted to focus on a player’s run of cards for his entire career.

Buffalo born, HOF pitcher, Warren Spahn is the ideal choice for this mini collection. Warren Spahn was born in Buffalo, NY in 1921 and attended South Park High School in South Buffalo. He was signed by the Boston Braves in 1940 and was called up in 1942. After the season, he enlisted in the US Army and served four years during WWII.

He saw action during battles in Europe and earned several medals, including the Purple Heart. Following the end of the war, Spahn returned to the Major Leagues in 1946. Spahn would go on to pitch another 20 years, and become the winningest Left handed pitcher in MLB history. He would finish with 363 wins and 2,583 Ks. Spahn was a 17x All Star and would win both the CY Young award and World Series in 1957 with Milwaukee. He also threw two no-hitters in 1960 and 1961 when he was 39 and 40 years old.

I already have a few of his cards in my collection. These include a couple raw cards in semi rigid holders and also a PSA 1960 Topps card in that mini collection. For this run of cards, I plan to acquire cards that are in PSA holders. I like BVG holders as well,

but there are more PSA cards that are available. For this set, I want to put a collection together that has nice eye appeal. I’d like to get cards that have nice corners and edges and are at least mid grades. For some of the earlier cards, I might have to sacrifice condition for cost. For now, I will focus on Topps and Bowman primary releases. Between 1948-65, there were 25 cards made by Topps and Bowman in the main sets. Warren Spahn’s rookie card is the 1948 Bowman card. His 1st main Topps card is the 1952 Topps card. Last weekend I made my first two purchases. I won a couple of auctions on eBay for around the same cost as two retail blaster boxes. I won a 1957 PSA 5 and 1961 PSA 6. Both of these cards have good edges and corner. The centering is a little off which brought the grades down.

This mini collection is going to be a marathon, especially with the early Bowman cards. I have very few cards from Bowman sets from early 50s and I do not have any cards from the 40s. I know that they will be tougher to find. I may pick some of his cards from the odd-ball sets, but they aren’t my focus at this time. I’m looking forward to this journey. Happy Collecting!